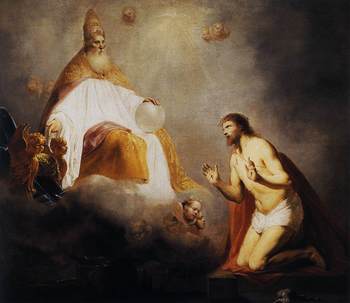 Solemnity of Our Lord Jesus Christ, King of the Universe
Last Sunday in Ordinary Time B
John 18: 33-37
Apocalypse 1:5-8
Daniel 7:13-14
November 26, 2006
Mass in Thanksgiving For My Twenty Years of Priesthood
Worthy is the Lamb
As we crossed the threshold into the Sacred Mysteries today, we sang of a breathtaking vision. John, the Beloved Disciple, in solitude on the island of Patmos, lifted his eyes to heaven’s open door. And what did he see? He saw the throne of God, and “the Lamb, standing as though it had been slain” (Ap 5:6). John’s eyes were opened, and so too were his ears. “Then, I looked,” he says, “and I heard around the throne and the living creatures and the elders the voice of many angels, numbering myriads of myriads and thousands of thousands, singing with a loud voice, ‘Worthy is the Lamb who was slain, to receive power and wealth and wisdom and might and honour and blessing’” (Ap 5:11-12).
A Glimpse and Foretaste of Heaven
In a word, John was given a glimpse and foretaste of the heavenly liturgy. And then he heard “every creature in heaven and on earth and under the earth and in the sea, and all therein, saying, ‘To Him who sits upon the throne and to the Lamb be blessing and honour and glory and might forever and ever!’ And the four living creatures said. ‘Amen!’ and the elders fell down and adored” (Ap 5:13–14).
Heaven in the Heart and the Heart in Heaven
The priest, every priest, is a poor man, “a man of unclean lips dwelling in the midst of a people of unclean lips” (Is 6:5) at the service of this glorious mystery. When the priest, whoever he is and wherever he may be, enters the sanctuary for Holy Mass, the angels enter with him, myriads of myriads of angels and thousands of thousands. Heaven descends to rest upon the altar and, from the altar, the whole Church — that is all who gathered about it — are assumed into heaven. Holy Mass is just this: an hour in heaven. The priest and, with him, anyone who partakes of the Holy Mysteries, believing, hoping, loving, desiring, and adoring, leaves church with heaven in his heart and with his heart in heaven.