Skip to content
HomeHomiliesAt That Time Shall Arise Michael 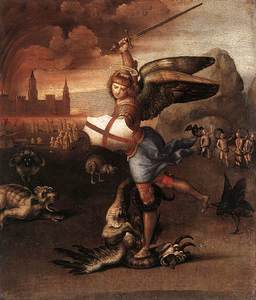 Michael, the Great Prince
“At that time shall arise Michael, the great prince who has charge of your people. And there shall be a time of trouble, such as never has been since there was a nation till that time; but at that time your people shall be delivered, every one whose name shall be found written in the book” (Dan 12:1). The prophet Daniel reveals the role of Saint Michael the Archangel in the great final conflict of history. Saint Michael is the guardian angel and champion of the Jewish people and of the Church of Christ.

Spiritual Combat
The Apocalypse of Saint John also describes Saint Michael’s glorious defeat of the powers of darkness: “Now war arose in heaven, Michael and his angels fighting against the dragon; and the dragon and his angels fought, but they were defeated and there was no longer any place for them in heaven” (Ap 12:7). The Church, with Saint Michael as her defender, is at war. Saint Paul tells us that the Church is locked in combat, contending “not against flesh and blood, but against the principalities, against the powers, against the world rulers of this present darkness, against the spiritual hosts of wickedness in the heavenly places” (Eph 6:12).

Pope Leo XIII and Saint Michael
At the end of the nineteenth century, Pope Leo XIII had a vision while assisting at Holy Mass: it concerned a great diabolical assault upon the Church. A priest in attendance related that the Pope began to look upwards; his face grew pale. Visibly shaken he withdrew to his private office, and a short time later, having called for the Secretary of the Congregation of Rites, he handed him a document. The document contained Pope Leo’s prayer to Saint Michael. The Pontiff ordered that the prayer be disseminated to the Catholic bishops of the whole world for recitation after every Low Mass.

Saint Michael the Archangel, defend us in battle.
Be our protection against the wickedness and snares of the Devil.
May God rebuke him, we humbly pray;
And do thou, O Prince of the Heavenly Host,
by the power of God, thrust into hell Satan
and all the other evil spirits who prowl about the world
seeking the ruin of souls. Amen.

Pope John Paul II and Saint Michael
Over a century later, the Servant of God Pope John Paul II asked for a revival of the Leonine prayer to Saint Michael in his Angelus message of April 24, 1994. The Pope spoke that day of the “woman clothed with the sun” (Ap 12:1) and of the attack on woman and on life that characterizes our times: “May prayer strengthen us for the spiritual battle of which we are told in the Letter to the Ephesians: ‘Draw strength from the Lord and from His mighty power’ (Eph 6:10). It is this same battle to which the book of the Apocalypse refers, recalling before our eyes the image of Saint Michael the Archangel (cf. Rev 12:7). Pope Leo XIII certainly had a very vivid vision of this scene when, at the end of the last century, he introduced a special prayer to Saint Michael throughout the Church. Even if this prayer is no longer recited at the end of every Mass, I ask everyone to remember it and to recite it to obtain help in the battle against forces of darkness and against the spirit of this world.” How many Catholics have taken this formal request of Pope John Paul II to heart?

Preserve Me, O God
Like the Leonine Prayer to Saint Michael, today’s Responsorial Psalm, is also a prayer for protection. In the Acts of the Apostles 2:25–28 Saint Peter applies this very psalm to the passion and resurrection of Christ; as history unfolds, its application to the passion and resurrection of the Church comes into focus more clearly. “Preserve me, O God, for in Thee I take refuge” (Ps 15:1).

The Lord Always Before Me
The psalm asks for divine protection; at the same time, it is full of confidence. It alludes to the mystery of the Eucharist, the pledge of future glory: “The Lord is my chosen portion and my chalice” (Ps 15:5). One who seeks the Face of the Lord hidden in the Eucharist will not be cast down in combat: “I keep the Lord always before me; because He is at my right hand, I shall not be moved. Therefore my heart is glad, and my soul rejoices; my body also dwells secure” (Ps 15:9).

Our Eternal High Priest
The Letter to the Hebrews reveals the source of our confidence and joy even in this valley of combat and tears. We have in heaven an Eternal High Priest who has “offered for all time a single sacrifice for sins” (Heb 10:12). The day will come when all the enemies of God will be made “a stool for His feet” (Heb 10:13). “And then they will see the Son of Man coming in clouds with great power and glory” (Mk 13:26).

Wounded in Battle
The Holy Gospel makes it clear that spiritual combat will last until the end of time. Life is pitted against death; light against darkness; hatred against love; humility against pride. We are, each of us, engaged in that combat. Each of us will experience, in one way or another, the wounds of battle; no one will emerge from the conflict without scars, but in the Kingdom our scars, like the glorious wounds of Christ, will shine like the stars. “Those who are wise shall shine like the brightness of the firmament; and those who turn many to righteousness, like the stars forever and ever” (Dan 12:3).

The Son of Man Is Near
“When you see these things taking place,” says the Lord, “you will know that the Son of Man is near, at the very gates” (cf. Mk 13:29). So many of the things prophesied in the Scriptures are indeed taking place. This is a reason not for panic and fear, but for confidence and hope. The victory is assured ahead of time by the Precious Blood of the Lamb. Holy Mary, the Woman clothed with the sun intercedes for us and Saint Michael, the Prince of the Heavenly Hosts, does battle for all who belong to the Lamb. “But of that day or that hour no one knows, not even the angels in heaven, nor the Son, but only the Father. Take heed, watch; for you do not know when the time will come” (Mk 13:33).