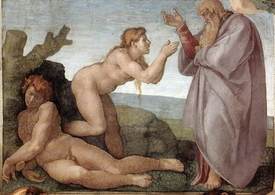 TWENTY–SEVENTH SUNDAY OF THE YEAR B
Genesis 2:18-24
Psalm 127:1-2, 3, 4-5, 6
Hebrews 2:9-11
Mark 10:2-16
Suscipe me, Domine, secundum eloquium tuum , et vivam;
et non confundas me ab expectatione mea.
Receive me, O Lord, according to thy word, and I shall live:
and let me not be ashamed of my hope.
Suscipe Me
The Word of God, even while it speaks today of marriage, speaks to all of us: to the married and the unmarried, to those living within monastic enclosure, and to those living in the countless others “enclosures” of parenthood, friendship, elected solitude, and professional responsibilities. To each one of us the Word of God speaks today of the mysterious covenant of love between man and woman, and of the mysterious covenant of love between Christ and His Bride, the Church. When we listen with the ear of the heart to the liturgy and to the sacred gift of life itself, we are drawn more deeply into the mystery of the covenant. The Suscipe (Psalm 118:116) of monastic profession — Receive me, O Lord, take me wholly to thyself — and the message today’s Gospel are related, the one helping us to enter more deeply into the other.