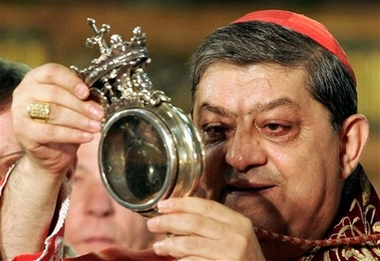 My wonderful friend Terry N. over at Abbey-Roads did an excellent post on San Gennaro. Here, a little late in the day, is my homily on every Neapolitan’s favourite saint, and on Our Lady of La Salette as well. One of Barbara Pym’s characters often exclaims, “Too much richness!” I love the richness of the Martyrology and of the Church’s calendar.
TUESDAY OF THE TWENTY-FOURTH WEEK OF THE YEAR II
September 19
Saint Januarius, Bishop and Martyr
1 Corinthians 12:12-14, 17-31a
Psalm 99:1-2, 3, 4, 5 (R. 3c)
Luke 7:11-17
This very morning in the cathedral of Naples in Italy, Crescenzio Cardinal Sepe lifted up the reliquary containing the blood of Saint Januarius and, as it was presented to the faithful, the dried blood of the bishop of Benevento, martyred under Diocletian in 305, liquefied and bubbled up. Once again the faithful had their miracle, breathed a sigh of relief, and expressed their joy as only Neapolitans can.
Saint Januarius, better know as San Gennaro, was very dear to the thousands of immigrants from Naples and the province of Benevento who poured into New Haven, Connecticut at the beginning of the last century. Today their descendents live not only in New Haven, but also in East Haven, Branford, Hamden, and Woodbridge. How many of them remember San Gennaro? San Gennaro was one of many heavenly friends who accompanied those emigrating from Southern Italy into a strange land far from their families. The emigration was not nearly so painful if one could take along one’s beloved saints and be assured of their protection.

The miracle of the liquefaction of San Gennaro’s blood strikes some people as strange or anachronistic. Others fear the encroachment of superstition. Still others, often those of Anglo-Saxon background, sniff dismissively at what they consider the exotic proliferation of devotional folklore proper to warmer climates.
God, however, delights in the glory that only Neapolitans can bring to Him and to His saints. The Kingdom of God is characterized by a gloriously Catholic diversity, one that is wide enough and deep enough to admit even the miraculous liquefaction of a vial of blood. Saint Paul tells us today that, “there are varieties of gifts, but the same Spirit; and there are varieties of service, but the same Lord; and varieties of working, but it is the same God who inspires them all in every one. To each is given the manifestation of the Spirit for the common good” (1 Cor 12:4-7).
Looking to the saints, magnificent in the variety of their temperaments and charisms, we see, with Saint Paul, that, “to one is given through the Spirit the utterance of wisdom, and to another the utterance of knowledge according to the same Spirit, to another faith by the same Spirit, to another gifts of healing by the same Spirit, to another the working of miracles, to another prophecy, to another the ability to distinguish between spirits, to another the various kinds of tongues, to another the interpretation of tongues” (1 Cor 12:8-10).
Moving, for a moment, from Naples to the French Alps, and from the First Reading to the Gospel, we see a sorrowful mother, a widow bereft of her only son. She is weeping. The tears of the widow of Nain remind us of the tears of another sorrowful mother, the Blessed Virgin Mary, who on September 19, 1846, appeared at La Salette to two poor shepherds.
Attracted by a wonderful globe of light, the children saw a radiant woman weeping, with her face hidden in her hands. When they saw her face, it was indescribably beautiful, even as tears flowed from her eyes. On her breast she wore a crucifix having a hammer and pincers on its arms. The Lady was grieved that the people worked on Sundays and blasphemed. She invited to repentance and, through repentance, to a spiritual resurrection.
Saint Augustine, in commenting on today’s Gospel, sees it as an image of spiritual resurrection. “And he gave him to his mother” (Lk 7:15). The young man called out of death and given back to his mother illustrates what happens whenever a sinner is restored to grace and given back to his mother, the Church.
The tears of the widowed mother of the Gospel are, at the same time, a reminder of the tears of the Mother of Sorrows, the Reconciler of Sinners who appeared at La Salette. Wherever the tears of the Blessed Virgin Mary fall, they bring compunction, healing, and purity of heart. There is no grace of spiritual resurrection that does not pass through the hands of Our Lady, the Reconciler of Sinners. I have seen it time and time again. Once a sinner, — even the most hardened sinner — appeals to the Blessed Virgin Mary and allows himself to be touched by the tears she shed at the foot of the Cross, his spiritual resurrection is assured. There is no sinner called out of spiritual death who is not entrusted by Jesus to the care of His Virgin Mother Mary and of His Church.
We are invited today to learn something of the language of blood and of tears. Blood and tears belong to the vocabulary of suffering love. Those who have suffered and those who love understand such things. May the Sorrowful Mother of La Salette and San Gennaro intercede for all those in whose hearts faith has grown dry and crusty and cold, that by the action of the Holy Spirit it may liquefy and boil.