Skip to content
HomeHomiliesTwenty–Second Monday of the Year II 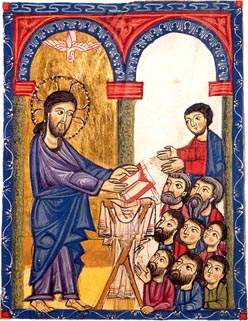 Father, Son, and Holy Spirit
An ancient illumination of this episode depicts Jesus standing at the ambo with the book open in front of him; over his head we see the Holy Spirit in the form of a dove descending. The adorable mystery of the Trinity is revealed: Jesus is the Anointed One, the Christ; the Holy Spirit is the Anointing; the Father is the Anointer. The Spirit of the Father rests upon the Son.
The scene is strangely evocative of what happened at Jesus’ baptism in the Jordan: “And when Jesus also had been baptized and was praying, the heaven was opened, and the Holy Spirit descended upon Him in bodily form as a dove, and a voice came from heaven, ‘Thou art my beloved Son; with Thee I am well pleased’” (Lk 3:21–22). There is but one difference. Whereas at the baptism the voice of the Father bore witness to the Son, here the voice of the Son bears witness to the Father. “He has anointed Me,” he says, and then, “He has sent Me” (Lk 4:18).
The Eyes of All in the Synagogue Were Fixed on Him
“The eyes of all in the synagogue were fixed on Him” (Lk 4:20). Origen dwells at length on this one sentence and, as you might guess, speaks to us of the Face of Christ:
Now too, if you want it, your eyes can be fixed on the Saviour in this synagogue, here in this assembly. When you direct the principal power of seeing in your heart to wisdom and truth and to contemplating God’s Only–Begotten, your eyes gaze on Jesus. Blessed is that congregation of which Scripture testifies that ‘the eyes of all were fixed on him!’ How much would I wish that this assembly gave such testimony. I wish that the eyes of all (of catechumens and faithful, of women, men and children) — not the eyes of the body, but the eyes of the soul — would gaze upon Jesus. When you look to Him, your faces will be shining from the light of His gaze. You will be able to say, ‘The light of your Face, O Lord, has made its mark upon us.’ (Homilies on the Gospel of Luke 32.6)
Grace is Poured Out on Thy Lips
If only the people of the synagogue had been able to listen to Jesus as well as they looked at Him! At first, they are intrigued and, I think, not a little amazed at what He has to say: “Today this scripture is fulfilled in your hearing” (Lk 4:21). They didn’t listen quietly. They exchanged comments among themselves and made observations. “And all spoke well of Him, and wondered at the gracious words which proceeded out of His mouth; and they said, ‘Is this not Joseph’s son?’” (Lk 4:22). The crowd is fickle. Admiration turns to speculation. Speculation turns to doubt. Doubt will turn to indignation and, in the end, give rise to a violent rejection.
The Acceptable Time, The Day of Salvation
Jesus speaks a hard truth. First He sums it up in a proverb: “Truly, I say to you, no prophet is acceptable in his own country” (Lk 4:24). Then He recalls the widow of Zarephath to whom God sent Elijah, and Naaman the Syrian to whom He sent Elisha. Is Our Lord deliberately being provocative here? Yes. He seeks to provoke the people of Nazareth into a change of heart. Here was the opportunity for repentance. Here was the moment of grace. All in the synagogue could have had a change of heart. They could have prayed Jesus to remain with them, to grace them with the light of His face and the words of His mouth. Instead, spurning “the acceptable time and the day of salvation” (cf. 2 Cor 6:2), they were “filled with wrath. And they rose up and put Him out of the city, and led Him to the brow of the hill on which their city was built, that they might throw Him down headlong” (Lk 4:28–29).
The whole incident is a preview of what Saint Luke will recount at the end of his Gospel. There, the city will be Jerusalem, not Nazareth. A welcoming crowd wild with joy will shout, “Blessed is the King who comes in the name of the Lord! Peace in heaven and glory in the highest!” (Lk 19:38). Jesus however, knowing their fickle hearts, “when he drew near and saw the city, wept over it” (Lk 19:41). Within a week’s time, the Hosannas of the multitude will have turned to hateful cries of, “Crucify Him! Crucify Him!” (Lk 23:21).
He Went Away
The final line of today’s Gospel is almost unbearably sad. “But passing through the midst of them, He went away” (Lk 4:30). Here is a sobering truth: it is within the power of each of us to cause Our Lord to go away. Every time His Word is refused, every time an occasion of grace is spurned, every time we seek to silence His voice, He leaves us to ourselves, hiding His Face from us lest we see His tears. This does not mean that there will be no other visitations of Divine Mercy, no other occasions of grace. It does mean that the one we refused is gone forever. “If then, today, you hear His voice, harden not your hearts” (cf. Ps 94:7–8).