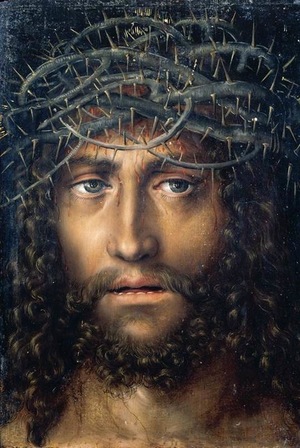 Twenty–Fourth Sunday of the Year B
Isaiah 50:5-9a,
Psalm 115:1-2, 3-4, 5-6, 8-9
James 2:14-18
Mark 8:27-35
By a happy coincidence, the Word of God today echoes Thursday’s solemn festival of the Exaltation of the Holy Cross and carries us more deeply into its mystery. We listened, in the First Reading, to Isaiah’s mysterious prophecy of the Passion of Christ. Like a photograph developed in a darkroom, an image emerged from the sacred page: the portrait of One who goes forward into suffering, fully conscious of what awaits Him, totally abandoned to God who alone can save Him. “I gave my back to the smiters, and my cheeks to those who pulled out the beard; I hid not my face from shame and spitting” (Is 50:6). The adorable Face of the suffering Christ came into focus, the Holy Face that, from the earliest preaching of the Gospel, captivated believers, drawing them irresistibly into the mystery of the Cross.
In the apse of ancient Christian basilicas, it was not uncommon to see an immense cross, worked in shimmering mosaic. The body of Christ was not depicted on the cross; instead, at the center of the cross, in a shining circle at the juncture of the vertical and horizontal beams, was an image of the Holy Face of Christ. The arms of the Cross converged in the Face of Christ, His most distinctive characteristic.

The uniqueness of each human face expresses the uniqueness of each person’s identity. Our personal identity is linked to the image of our face, as on a photo ID card. By placing the Face of Christ at the center of the Cross, the artisans of old were suggesting that the Cross is the key to Christ’s identity and the Face of Christ the key to understanding the mystery of the Cross. Apart from the Cross, there is no knowledge of Christ, no understanding of His mission, no experience of His love, no way of answering the question put to Peter in today’s Gospel, “Who do you say that I am?” (Mk 8:29).
The First Reading focused our attention on the Face of the suffering Christ; the Responsorial Psalm filled our hearts with the sound of His voice. To the uniqueness of Christ’s human face is added that other identifying characteristic of the human person, the uniqueness of the voice. By juxtaposing this particular psalm to the prophecy of Isaiah, the liturgy suggests that in it we are to hear the voice of the suffering Christ, and the unmistakable accents of His prayer to the Father. “I love the Lord — my Father — because He has heard my voice and my supplications. He inclined His ear to me, therefore I will call on Him as long as I live” (Ps 116:1-2).
The Letter to the Hebrews describes this prayer of the suffering Christ to the Father: “In the days of His flesh, Jesus offered up prayers and supplications, with loud cries and tears, to Him who was able to save Him from death, and He was heard for His godly fear” (Heb 5:7). The sacred liturgy is precisely the experience in faith, here and now, of the Face and of the voice of the living Christ; of the penetrating gaze from the Cross and of the prayer from the Cross; of the gaze that searches hearts and of the prayer that pierces the heavens and fills the whole cosmos.
In the Second Reading, Saint James says, “I by my works will show you my faith” (Jas 2:18). The Church, the assembled body of believers, shows forth her faith by doing the work of the liturgy. The liturgy is the supreme work of the Church, the source and summit of all her works, the highest expression of her faith, the work done always, in every place, by all believers, “from the rising of the sun to its setting” (Mal 1:11, E.P. III). Just as a faith without works is dead, so too, a church without the Eucharist is no church at all.
The doing of the Eucharist in obedience to Christ’s command, “Do this in remembrance of me” (1 Cor 11:24), shows forth the mystery of the Cross, and makes it present. The Cross is Christ’s own work, the immense work of redeeming love accomplished with hands outstretched upon the wood. The liturgy of September 14th sings, “This was Love’s great work that death should die, when Life itself was slain upon the tree” (Antiphon, 2nd Vespers). The Cross is the work of love “obedient unto death” (Phil 2:8), the work of a “love “strong as death” (Ct 8:6).
The death of the crucified Jesus signifies the completion of His work in the Spirit. Jesus prays, “Father, I glorified thee on earth, having accomplished the work which thou gavest me to do” (Jn 17:4), and then, from the Cross, He utters, “It is finished” (Jn 19:30). In the Eucharist, the work of Christ intersects the work of the Church. The cruciform work of the Eucharist reveals the faith of the Church and shows forth the Cross, the key to Christ’s identity.
Before the work of the Cross was accomplished, not even Peter held the key to the identity of his Master. “Who do you say that I am” (Mk 8:29)? At one level, Peter answered correctly. “You are the Christ” (Mk 8:29). Nonetheless, the separation of the Christ from the Cross so compromised Jesus’ mission, and so distorted His identity, that Peter was sharply rebuked. “Get behind me Satan! For you are not on the side of God, but of men” (Mk 8:33). There is no half-truth so dangerous to the faith of Christians as the separation of Jesus the Christ from the mystery of the Cross.
What is true of Christ is true of Christians. The lifework of the Christian, quite apart from any gifts, accomplishments, words, or deeds, is the work of the Cross, the surrender of self to the Father in the crucible of suffering. Paul says it: “I rejoice in my sufferings for your sake, and in my flesh I complete what is lacking in Christ’s afflictions for the sake of His body, that is, the church” (Col 1:24). The identity of the Christian is inextricably bound, I want to say, nailed, to the wood of the Cross. ”If any man would come after me, let him deny himself and take up his cross and follow me” (Mk 8:34).
Because the essential work of the Christian is the Cross, it is also the Eucharist, for in the Eucharist, suffering is converted into love, and love into victory over death. And so, it is time now to do what we have announced, time to fulfill again the words of the apostle, “As often as you eat this bread and drink the cup, you proclaim the Lord’s death until He comes” (1 Cor 11:26).