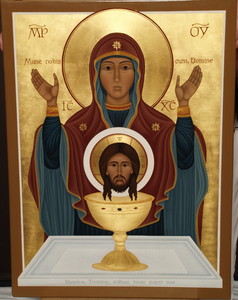 To contemplate the face of Christ, and to contemplate it with Mary, is the “programme” which I have set before the Church at the dawn of the third millennium, summoning her to put out into the deep on the sea of history with the enthusiasm of the new evangelization. To contemplate Christ involves being able to recognize him wherever he manifests himself, in his many forms of presence, but above all in the living sacrament of his Body and Blood. The Church draws her life from Christ in the Eucharist; by him she is fed and by him she is enlightened. The Eucharist is both a mystery of faith and a “mystery of light.” Whenever the Church celebrates the Eucharist, the faithful can in some way relive the experience of the two disciples on the road to Emmaus: “their eyes were opened and they recognized him” (Lk 24:31). . . . I cannot let this Holy Thursday 2003 pass without halting before the “Eucharistic face” of Christ and pointing out with new force to the Church the centrality of the Eucharist.

The Face of Christ Turned Toward Us
The experience of the disciples on the road to Emmaus culminated in their eyes being opened to see the Eucharistic Face of Christ. “When he was at table with them, he took the bread and blessed, and broke it, and gave it to them. And their eyes were opened and they recognized him; and he vanished out of their sight” (Lk 24:30-31). Christ vanished from the sight of the disciples, leaving in their hearts a mysterious burning (cf. Lk 24:32), and the broken Bread that at once conceals and reveals his Eucharistic Face. In the Eucharist the Face of Christ is turned toward us. The Eucharistic Face of Christ waits to meet the gaze of our faith, waits to be sought and recognized, adored and implored. “We see now through a glass in a dark manner; but then face to face. Now I know in part; but then I shall know even as I am known” (1 Cor 13:12). Sanctissima Facies Iesu, sub sacramento abscondita, respice in nos et miserere nostri.

The Healing Radiance of the Eucharistic Face
The Face of Christ shines through the veil of the Sacred Species to illumine those who seek it there. The radiance of the Eucharistic Face of Christ heals and repairs the disfiguration of sin; it restores beauty to the face of the soul and likeness to the image of God obscured by sin. It is in the Eucharist that the prayer of the psalmist is wonderfully fulfilled: “The light of your face, O Lord, is signed upon us: you have given gladness in my heart” (Ps 4:7). Again, it is the psalmist who says, “Look to him and be radiant, and your faces shall not be put to shame” (Ps 33:6). The adorer who seeks the Eucharistic Face will experience that in its light there is the healing of brokenness and the beginning of transfiguration. “And we all, with unveiled face, beholding the glory of the Lord, are being changed into his likeness from one degree of glory to another; for this comes from the Lord who is the Spirit” (2 Cor 3:18).

The Eucharistic Face of Christ is veiled beneath the humble species of bread lest we be blinded by its glory. “His face,” says Saint John, “was like the sun shining in full strength” (Rev 1:16). The rays of that Sun reach us nonetheless through the appearance of bread that conceals it; its healing effects are not in any way diminished, nor is the splendour of its glory. “We look not to the things that are seen but to the things that are unseen” (2 Cor 4:18). “For it is the God who said, ‘Let light shine out of darkness,’ who has shone in our hearts to give the light of the knowledge of the glory of God in the Eucharistic face of Christ” (cf. 2 Cor 4:6).

The Face and the Heart
The sentiments of every human heart find expression on the face even before they are communicated in words. So too are the secrets of the Sacred Heart revealed on the Face of the Word made Flesh and communicated to those who seek that Face in the mystery of the Eucharist. One who seeks the Face of Christ will be led surely, inexorably, to the inexhaustible riches of his Heart.

The Generation of Those Who Seek His Face
He who is from all eternity “in the bosom of the Father” (Jn 1:18) is also, “in these last days” (Heb 1:2), sacramentally present in the heart of the Church, abiding there as “the living Bread which came down from heaven” (Jn 6:51). It is in adoring him there that we become “the generation of those who seek him, who seek the face of the God of Jacob” (Ps 23:6).

Adoring Silence
Pope John Paul II’s legacy includes the discovery in “adoring silence” of the Eucharistic Face of Christ. The Sacred Liturgy itself and the corollary practices of lectio divina and Eucharistic adoration are the primary and indispensable places of seeking after the Face of Christ, of finding it, and of adoring. Nonetheless, it pleases the Holy Spirit by means of the repetition of invocations drawn from the liturgy or from the Scriptures, to “help us in our weakness, for we know not how to pray as we ought” (Rom 8:26).

The following prayer emerged in the Year of the Eucharist on the feast of Corpus Christi as a fruit of the teaching of Pope John Paul II. It may be used by anyone who feels the need to anchor his “adoring silence” in a simple formula of words repeated from the heart. It may also be prayed in intercession for others, especially for priests, or in a spirit of reparation, asking the Eucharistic Face of Jesus to repair and heal persons and situations disfigured and wounded by sin.

THE CHAPLET OF THE EUCHARISTIC FACE OF CHRIST
+
O sacred banquet in which Christ is received,
the memory of His passion is renewed,
the soul is filled with grace,
and a pledge of future glory is given us, (alleluia).

Before each decade:
My soul is thirsting for God, the strong and living God;
when shall I enter and see the Face of God? (Ps 41:3)

On the Glory be to the Father beads:
Behold, O God our protector,
and look upon the Face of Thy Christ. (Ps 83:10)

In conclusion, three times:
Father, glorify the Eucharistic Face of Thy Son,
that Thy Son may glorify Thee (cf. Jn 17:1).

The chaplet may be concluded with the Salve Regina, thereby entering into Pope John Paul II’s desire that we should contemplate the Face of Christ with Mary.