Skip to content
HomeHomiliesSaints John and Paul, Martyrs of Rome 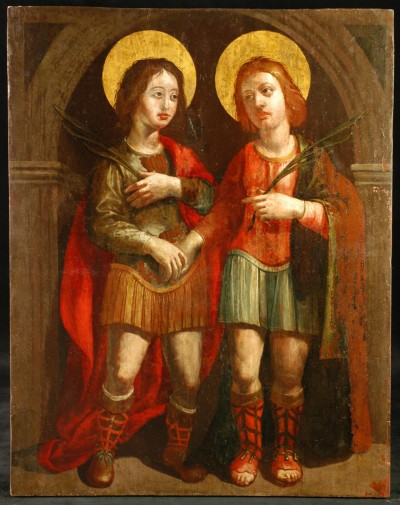 Friends and Martyrs of the Church at Rome

Today is the memorial of Saints John and Paul, named both in the Martyrology and in the Roman Canon. There is a proper Office for their feast with antiphons taken from the account of their passion.

John and Paul were Roman soldiers in the service of Constantia, the daughter of Constantine. They chose the friendship of Jesus Christ over the favour of Julian the Apostate. The liturgy draws on the imagery of the Apocalypse to describe them as “two olive trees and two candlesticks shining before the Lord” (Apocalypse 11:4). The texts of their Proper Mass speak of the bonds of friendship and true fraternity.

The Church and Monastery of Saints John and Paul are on the Coelian Hill, a mere twenty minute walk from the Lateran Basilica. One can also visit there the cell of Saint Paul of the Cross, founder of the Passionists.

Safely Through a Hundred Trials

The Mass and Office of Saints John and Paul left their mark on the soul of the young Suzanne Wrotnowska (1902-1983, in religion, Mère Marie des Douleurs), foundress of the Benedictines of Jesus Crucified (Brou–sur–Chantereine, France), and, over the years, provided her, again and again, with food for meditation and exhortation. The Introit of the today’s Mass spoke to her heart; in some ways it was strikingly prophetic of things to come: “Multae tribulationes . . . Though a hundred trials beset the righteous, the Lord will bring them safely through them all. Under the Lord’s keeping every bone of theirs is safe, not one of them shall suffer harm” (Ps 33:30-21). Suzanne’s writings, even while she was still in her twenties, reveal her capacity to attend to the texts of the Mass and Divine Office, and to draw out of them light for the conversion of her life, fortitude, and joy.

Writing on the feast of Saints John and Paul in 1932, Mother Marie des Douleurs offered her daughters a teaching from the Alleluia verse of the Mass: “This is true brotherhood, that triumphed over the reproaches of earth and followed Christ, laying hold of the glories of a heavenly kingdom.” The youthful foundress, writing after a little more than six months of life in community, was demanding, uncompromising, and realistic:

The holy martyrs John and Paul found in their common martyrdom a brotherhood deeper than that of blood. For us, without having been called to the honour of martyrdom, we will find true brotherhood not in natural affection, nor in a community of tastes, occupations, and life, but in the total immolation of ourselves.Here, in the perfect unity of the divine Heart, is where we will find one another: in the complete sacrifice that we promise, translated into a continual, smiling, and courageous abnegation.

This brotherhood of ours is very sweet, very intimate, very true if it is above ourselves. Otherwise, not only will it be disappointing and mediocre, it will not be able to last. We will love one another to the extent that we are sacrificed, insofar as we will have shared in the dispositions of the divine Victim.

The vocabulary is one of oblation: victimhood, immolation, and sacrifice. It is the language of martyrdom and of the Cross. Mother Marie des Douleurs takes care, however, to bring her meditation down out of the clouds of pious imaginings and mere fantasies of virtue into the concrete reality of life together. Her teaching is austere. It can sound coldhearted:

Look not for natural affection. Don’t expect to share the same tastes or the same interests. Living under the same roof is no guarantee of brotherhood. True brotherhood is in the total immolation of ourselves.

This seems almost exaggerated, until one reviews it in the more gentle light of Saint Benedict’s wisdom. The Patriarch says the same thing in other words:

This therefore is the zeal which monks should practise with the most ardent love, in other words, they should forestall one another in paying honour. They should with the greatest patience make allowance for one another’s weaknesses, whether physical or moral. They should rival with one another in practicing obedience. No one should pursue what he thinks advantageous for himself, but rather what seems best for another (RSB 72:3-7).

Keep A Firm Grip on Patience

Opportunities for the imitation of Christ in victimhood, immolation, and sacrifice come looking for us; there is no need to invent them. The immolations we invent are, for the most part, confections of fantasy and self-delusion anyway. Saint Benedict comes closer to the reality of sacrifice when he speaks of the brother enjoined to carry out an impossible task (RB 68), and when, in Chapter VII, he describes the fourth step of humility:

When in the very act of obeying one meets with trials, oppositions, and even abuse, a man should, with an uncomplaining spirit, keep a firm grip on patience, and as he endures he should neither grow faint nor run away (RSB 7:35-36).

Writing again in 1934 on the liturgy of Saints John and Paul, Mother Marie des Douleurs commented on the Benedictus antiphon. What she says concerning her Congregation can be applied to any community or family. These are her words:

John and Paul, by the martyrdom they endured heroically, give us above all a great lesson of union. They were separated from one another in nothing: their spirits, their hearts, their souls formed but one love for God. This is the model of the union we must attain in the Congregation. We will be a terrible force raised against the undertakings of the devil if we are truly united, not only by living the same life and having the same plan to glorify God, but by having one mind, by suffering one another’s sufferings and trials, by rejoicing in one another’s joys, by living — in a word — a great life, that of Christ, through our Sisters, and not at all by living a little life of our own, with our little suspicions, our little preferences, with that petty personality of ours that causes delay, weighs down, and becomes a burden. If we love the Congregation and the souls that make it up, if we wish to respond to God’s designs on us, we have to make a constant effort towards union. Let us ask this grace of the holy martyrs, who, being brothers by blood, knew how to acquire and keep true spiritual brotherhood.

Joy and Life and the Power of the Cross

I am struck by Mother Marie des Douleurs’ repeated use of the word “little”. Here, she is not referring to the evangelical littleness of Saint Thérèse but, rather, to narrowness, pettiness, and self-absorption. These are the things that shrink the soul. These are the real impediments to magnanimity and of true communion. Choose to enter into sacrifice of Christ. Consent to let go of the things that keep us narrow-minded, small-hearted, and alienated from one another. In this there will be joy, and life, and the unleashing, in us and among us, of the power of the Cross.