Skip to content
HomeChurch LifeChristians on the Path of Golgotha 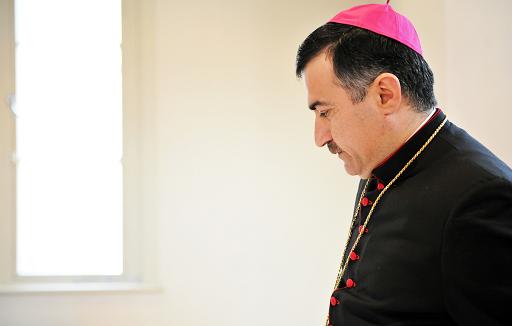 Address given by Archbishop Bashar Matti Warda of Erbil, Iraq to the General Synod of Anglican Bishops in London

Thank you very much for inviting me to the General Synod of the Church of England. I am grateful for this opportunity to share with you our pain and hope in Iraq.

I must say that this talk is perhaps the most difficult one of I have had to give. Many times I have spoken in front of audiences such as this, filled with kind and caring souls, but it has always been to give warnings of what might happen, and to invite investment and raise awareness about opportunities. This time is different.

Christianity in Iraq is going through one of its worst and hardest stages of its long history that dates back to the first century. Throughout all these long centuries, we have experienced many hardships and persecutions during which we offered caravans of martyrs.

The Christian community has enriched Mesopotamia throughout its historical stages with religion, culture, and civilization as well as a culture of coexistence despite the painful blows they have been experiencing throughout long centuries.

The recent decades have forced our faithful into displacement and immigration three times leaving behind each time a history and a culture that many sought to suppress and wipe out.

My Christian people in many villages faced upheavals that followed World War Two. Before that, we were victims of acts of genocide at the hands of the Ottoman Turks during the Massacre of Safar Ber lik (Seifo) 1915, and then the Massacre of Semele 1933 at the hands of the Iraqi army. During the Kurdish Uprising in 1961 and the Soriah Uprising in 1969, we were forcibly evicted from numerous villages and towns, and resettled in Baghdad and Mosul.

The acts of genocide, both organized and arbitrary as well as displacement continued unabated starting from Basrah, Baghdad, Mosul, and Kirkuk in the aftermath of the last regime change in 2003. They were crowned by the Massacre of the Church of Our Lady of Salvation in Baghdad in 2010 during which the Christian worshipers were killed in cold blood. This was followed by acts of terrorism and displacement in 2014 the year that witnessed the worst acts of genocide experienced by us in our homeland. We are now facing the extinction of Christianity as a religion and as a culture from Mesopotamia.

During the past year more than 125, 000 Christians have been forced to flee from their villages only because they chose to remain Christians and refused the conditions ISIS imposed on them. They had to leave at night, under the cover of darkness. Many of them trod their own path of Golgotha for long hours, having left everything behind, other than their bare clothes.

Arriving on foot, they sought refuge in the relatively secure region of Kurdistan, having no idea as to whether they would ever be able to return to life-long homes. The political designation that is used to classify these brothers and sisters is “displaced.” If they decide to cross an international border, they will be classified as “refugees”.

These days the displaced among us have been hearing sad news reports of the acts of pillage and looting of their houses and the destruction of some of them as a result of military operations. They realize well that the military liberation of those areas is not the same as political liberation. We are waiting to know that our villages are safe and secure. We believe the dear Lord will allow us to see that day; and on that day we will return to deserted and ruined houses, empty schools and hospitals.

As for our precious churches, it is heartbreaking for us to imagine what they will look like when we return. But we can rebuild.

Today, we have families that are relying completely on the charity of others. Less than a year ago, these same families were in their own houses and were self-supporting, with sufficient or abundant regular incomes. These days, we pray in tents, having left behind ancient churches that lived the story of a flourishing Christianity, blessed with strong willing believers and martyrs.

Too many families have lost confidence in their homeland. This should not surprise anyone. The homeland of Christians has rejected them and thrown them up. They have chosen to immigrate to the unknown, confident that they will be more secure. The road to immigration has a very long queue. Our friends and families are queued up, waiting for months and years in Turkey, Lebanon, and Jordan for a chance to move again, maybe for the last time, to North America, Europe, or Australia. The difference in outlook between the Internally Displaced persons (IDP) and refugees is that the refugees have made a final decision to get out. The IDP crisis that we are now experiencing in Kurdistan is known as a refugee crisis in the lands of our neighbors. The displaced have either not made a final decision or have decided to try to save more money before they depart.

It is an understatement for me to simply say that we are in desperate need of financial and material support so that our families may stay and survive, or depart and survive. This crisis is one of chronic urgent need.

For the Chaldean Church, and our sister churches of the East, the persecution our community is enduring is doubly painful and severe. We are personally affected by need and by the reality that our vibrant church life is dissolving in front of our eyes. The massive immigration that is now occurring is leaving my church much weaker.

This is a deeply sorrowful reality. We who are part of the church hierarchy are very often tempted to encourage our parishioners to stay – keep the presence of Christ alive in this special land. But truly I and my brother bishops and priests can do no more than to advise young mothers and fathers to take all the necessary considerations into account and to pray long and hard before taking such a momentous, and perhaps perilous, decision.

The Church is unable to offer and guarantee the fundamental security that its members need to thrive. It is no secret that hatred of minorities has intensified in certain quarters over the past few years. It is difficult to understand this hate. We are hated because we persist in wanting to exist as Christians. In other words, we are hated because we persist in demanding a basic human right.

All us have a responsibility to help them through our personal prayers and sacrifices first, and then through a campaign of raising the awareness of the international community about the fragile condition of our Iraqi Christian community.

There are then, two things that we, as a church can do: the first is to pray. The second is to use the relationships and networks we share in as part of the Church of Christ as a pulpit to raise awareness about the true risk to our survival as a people. I cannot repeat loudly enough that our well-being, as a historic community, is no longer in our hands. The future will come, one way or the other, and for us this means waiting to see what sort of aid (military, relief aid) arrives.

There are a number of relief projects for which we need funding; in particular, we are requesting help to support renting houses for the Christian refugees who are living in public schools, and to support us in creating residential rental units on church land. That is a necessary and worthy project. With your help it will allow families a more stable environment and enable them to seek suitable jobs locally, even as they make long-term plans regarding immigration. Your help with implementing this short-term and long – term solution is very necessary. There are other projects which will help us as well.

We are thankful for the help organizations have been giving us. This generosity has fueled the hopes of many.