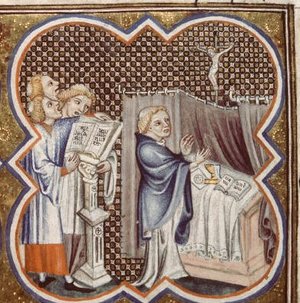 Taking the Step
December 17, 2010 will mark the fifth anniversary of my standing before the altar ad orientem for the Holy Sacrifice of the Mass. I began offering Holy Mass exclusively ad orientem at the Monastery of the Glorious Cross, where I served for a number of years as chaplain. I prepared the change in Advent 2005 with an appropriate pastoral and mystagogical catechesis.

Then Came Summorum Pontificum
After September 14, 2007, Summorum Pontificum made it much easier to celebrate the traditional rite of Holy Mass and, since undertaking my mission in Tulsa, I have offered the Extraordinary Form daily, having no desire and seeing no need, in the context of contemplative monastic life, of celebrating in the Ordinary Form.

No Going Back
That being said, after five years of offering Holy Mass ad orientem, I can say that I never want to have to return to the versus populum position. While traveling, I am, however, sometimes obliged to celebrate versus populum, notably in Ireland, in France and Italy; it leaves me with a feeling of extreme inappropriateness. I suffer from what I can only describe as a lack of sacred pudeur, or modesty in the face of the Holy Mysteries. When obliged to celebrate versus populum, I feel viscerally, as it were, that there is something very wrong — theologically, spiritually, and anthropologically — with offering the Holy Sacrifice turned toward the congregation.

Ten Advantages
What are the advantages of standing at the altar ad orientem, as I have experienced them over the past two years? I can think of ten straight off:
1. The Holy Sacrifice of the Mass is experienced as having a theocentric direction and focus.
2. The faithful are spared the tiresome clerocentrism that has so overtaken the celebration of Holy Mass in the past forty years.
3. It has once again become evident that the Canon of the Mass (Prex Eucharistica) is addressed to the Father, by the priest, in the name of all.
4. The sacrificial character of the Mass is wonderfully expressed and affirmed.
5. Almost imperceptibly one discovers the rightness of praying silently at certain moments, of reciting certain parts of the Mass softly, and of cantillating others.
6. It affords the priest celebrant the boon of a holy modesty.
7. I find myself more and more identified with Christ, Eternal High Priest and Hostia perpetua, in the liturgy of the heavenly sanctuary, beyond the veil, before the Face of the Father.
8. During the Canon of the Mass I am graced with a profound recollection.
9. The people have become more reverent in their demeanour.
10. The entire celebration of Holy Mass has gained in reverence, attention, and devotion.