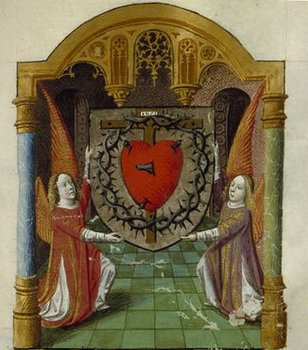 He Abjured Protestantism
May 30th is the feast of someone very dear to me — for the obvious reason — Saint Luke Kirby, priest and martyr. Born in 1549 in England under Edward VI — an England severed from its Catholic roots — Saint Luke was educated at Cambridge. He abjured Protestantism and was reconciled to the Catholic Church at Louvain. He studied for the priesthood at Douai College, then in Rome, and was ordained at Cambrai in 1577 for the English mission.

A Catholic Priest
As the world measures such things, Father Kirby’s missionary apostolate was a failure because it lasted but a few hours. He set out for England in the same valiant band that included Saint Edmund Campion, Saint Ralph Sherwin, and others, and made his way eventually to Dunkirk. He was arrested immediately upon landing at Dover in June 1580. His crime: simply being a Catholic priest. The threat he posed to national security: the Holy Sacrifice of the Mass offered according to the Roman Missal. The young Father Kirby risked his life, and lost it, to bring the Sacrifice of the Mass to England.

For the Love of Christ
Records from the seminary at Douai tell of his wholehearted and virile piety and especially of his patience in bearing a painful disease for the love of Christ. In the hope of gaining an increase of physical strength for his priestly vocation, he submitted bravely to a gruesome surgical operation. Though the operation was successful, Saint Luke Kirby remained frail for the remainder of his life. One can only imagine how he must have suffered from the hardships of imprisonment and the savage tortures inflicted on him.

Imprisonment and Afflictions Await Me
Saint Paul’s words in the Acts of the Apostles could have been those of the young Father Kirby setting out for England. They certainly express his state of soul” “The Holy Spirit testifies to me in every city that imprisonment and afflictions await me. But I do not account my life of any value nor as precious to myself, if only I may accomplish my course and the ministry which I received from the Lord Jesus, to testify to the gospel of the grace of God” (Ac 20:23-24).

Imprisoned and Tortured
Five days after his transfer to the Tower of London, Saint Luke was subjected to “the Scavenger’s Daughter.” This was a hinged hoop of iron; the prisoner was required to kneel and draw himself into a ball, the hoop was placed under his legs and across his back, and then drawn tight, the torturer helping the fit by kneeling on the prisoner’s shoulders. Among other things, it caused a flow of blood from the nostrils and sometimes from the tips of the fingers and toes. Father Kirby was tried and found guilty, together with Father Campion and other priests on November 16, 1581. Saint Luke was kept in prison until the end of May, the last four weeks in chains.

Tyburn
When Saint Luke was brought to Tyburn to be executed on May 30th, 1582, Blessed William Filby’s body was still hanging from the dreaded ‘triple tree’. Standing in the cart beneath the gallows, he declared himself innocent of the treason alleged against him and said that he was, in fact, about to die for the Catholic faith. A number of officials began wearisome discussions with him, arguing points of law and doctrine. They tried in several ways to induce him at first to denounce the Pope and finally to yield in any slight point of doctrine or practice. Father Kirby held fast to the Catholic faith.

Pater Noster
Finally, the Queen’s preachers bid him pray with them, in English, in his last moments: they would pronounce the prayer and asked Luke, if he found nothing objectionable, to repeat their words after them. “Oh,” he said, “you and I are not of one faith, therefore I think I should offend God if I should pray with you.” At this the people began to cry, “Away with him!” So, Saint Luke Kirby, an Englishman saying his Pater Noster in Latin, the language of the Church of Rome, ended his life. After the hanging, his body was gutted and quartered.

Quoniam Tu Mecum Es
The Communion Antiphon proper to today’s Mass of Saint Joan of Arc applies just as well to Saint Luke Kirby. It is a kind of murmuring of the Holy Comforter, an inspired whispering of the Spirit who “intercedes for the saints according to the will of God” (Rom 8:27). We do well to make it our prayer today: “Though I walk through the valley of the shadow of death, I will fear no evil, for you are with me, Lord Jesus (Ps 22:4).” Such a prayer can come only from the Holy Spirit who “helps us in our weakness, for we do not know how to pray as we ought” (Rom 8: 26).

Jhesu, Jhesu, Jhesu
Saint Luke’s last words were probably those prayed by so many of the English Martyrs; they are inscribed on the beams of the gallows that stands above the altar in the crypt church of the Benedictines of Tyburn: Jhesu, Jhesu, esto mihi Jhesus! “Jesus, Jesus, be to me a Jesus!” Relying on the intercession of Saint Saint Luke Kirby, let us beseech the Holy Comforter to burn the Name of Jesus into hearts and, at the hour of our death, place it on our lips.